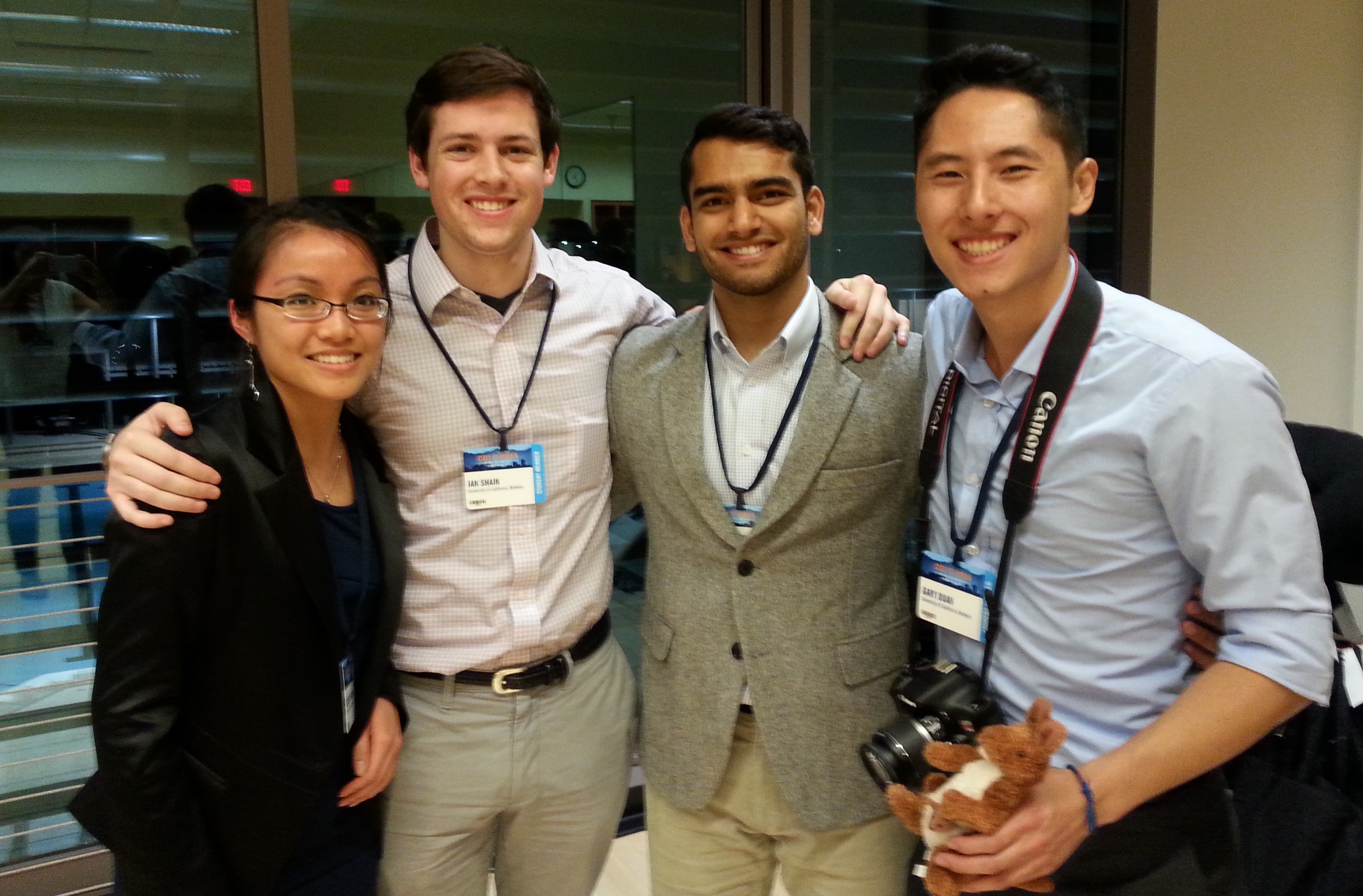 The 3-day conference is an invitation-only event that brings together ambitious young leaders dedicated to solving pressing global challenges. This year, 1,300 students representing more than 300 universities and 80 countries participated. 28 of Berkeley’s own – the highest number of Berkeley students ever accepted – attended the gathering with support from the Blum Center for Developing Economies. The Blum Center, UC Berkeley’s lead representative within the CGI-U Network, supports students who travel to the event and offers year-long advising to help students accomplish their project goals.

Two UC Berkeley student teams, Kanga Kare and Energant, were named winners of the Resolution Project’s Social Venture Challenge, a pitch competition between aspiring student entrepreneurs with sustainable social ventures. The two groups, which are also finalists in this year’s BigIdeas@Berkeley contest, were awarded seed funding that they will use to advance their projects toward implementation.

Represented at CGI-U by UCB undergrads Asad Akbany (bioengineering), Gary Duan (economics) and Ian Shain (mechanical engineering), Kanga Kare won $7500 to further their mission to provide low-cost baby incubators to hospitals in developing countries in order to prevent neonatal deaths. The team plans to use the money to conduct pilot trials of their product, IncuPack, in collaboration with local clinics and the UC Berkeley School of Public Health.

Energant, co-founded and represented at CGI-U by Jacqueline Nguyen (molecular toxicology), uses an energy-harvesting rocket stove called KleanCook that will allow individuals in developing countries to use the waste heat from their cooking fires to produce at least 10W of power, pasteurize water, and reduce smoky biomass emissions. Since receiving their $3,500 award, the Energant team has been hard at work optimizing their prototype. “It’s so exciting to see that what was once a flat idea on paper will become a tangible, life-changing device for the global communities that need it the most,” Nguyen said.

The CGI-U experience offers more than just an opportunity for funding; the gathering invited students to tread new ground and engage more deeply with the passion and creative energy that attendees collectively bring.

“CGI-U was an unparalleled learning, networking and growth opportunity personally and for my team,” shared Vrinda Agarwal, UC Berkeley student and member of 100 Strong. “I met more influential people in the span of three days than I have in a lifetime.”

The highlight of Agarwal’s weekend was her question to Hillary Clinton during the conference’s closing event. Agarwal eloquently spoke on the underrepresentation of women in politics and asked Secretary Clinton who would represent women in politics if not she. Agarwal’s passion for gender equality in America is what inspired her to create the project 100 Strong, which works to empower underprivileged high school women by providing them with mentors and leadership training.

CGI-U also provided students an opportunity for mentorship and guidance. The team members behind Kanga Kare, which has a partnership with Ashoka Thailand, exchanged business cards with Ashoka’s CEO, Bill Drayton. 100 Strong received advice on expanding their project from North Carolina School District Superintendent Austin Obasohan, among others.

“It was phenomenal to meet like-minded leaders from across the globe who have the same strong will to make a positive impact on the world,” reflected Nguyen. “We’re all very lucky to be happy and healthy, and we as global change-makers are in a prime position to make the world a more habitable place for everyone.”