The enormity of the world’s water and sanitation problems cannot be overstated. UN Water estimates that more than 3 million people die from water, sanitation, and hygiene-related causes each year, and nearly 10 percent of the global disease burden could be reduced through improved water supply, sanitation, hygiene, and water resource management.

In Nicaragua, the problem is no less dire. Among a population of just over 6 million, 48 percent don’t have access to adequate sanitation, according to a World Bank study—and 15 percent don’t have access to safe water, with much higher percentages for both needs in rural areas. This is particularly unfortunate because Nicaragua is known as the land of lakes and volcanoes; its rivers and reservoirs are far from parched like California. But it doesn’t have good water and sanitation infrastructure, which means many Nicaraguans rely on unfiltered water from groundwater sources, which are often contaminated by fecal matter.

That’s where NGOs like blueEnergy come in. Since 2004, the San Francisco-based nonprofit founded by Berkeley graduate Mathias Craig has been developing sustainable and community-based models to provide residents of Nicaragua’s Caribbean Coast access to clean water and improved sanitation. Among its projects are biosand water filters, which use gravity and naturally occurring bacteria to largely eliminate water contaminants and provide safe drinking water. Since 2009, blueEnergy has installed 900 biosand filters, which have benefitted more than 4,500 residents.

While there are septic tanks and stand-alone latrines in the Nicaraguan towns where the nonproft works, such as Bluefields, these facilities are rare and expensive. blueEnergy navigates the lack of municipal-level water treatment facilities by working at the household level. With a team of research fellows, interns, and community members, the nonprofit is helping transform how residents access clean water.

“The biggest impact that blueEnergy has is we pull together all the dimensions of a solution—people, technology, financing, planning, management—in a setting where the challenges are complex and the service ecosystem is not very well developed,” said Craig, who graduated from Cal in 2001 with a BS in Environmental Engineering.

During the summer of 2015, Badisha Roy, a Berkeley undergraduate student in the Department of Chemical Engineering, interned with blueEnergy to conduct comprehensive testing on biosand filters distributed to Bluefields residents in 2010. Funded by Cal Energy Corps and the Berkeley Energy and Climate Institute (BECI), Roy is among an annual group of students chosen to participate in blueEnergy’s programs in Nicaragua.

Roy said implementing a project of this nature poses numerous structural challenges. Bluefields may be Nicaragua’s chief Caribbean port, but there is rampant poverty, high unemployment, and lack of economic growth. “Water and sanitation are so important and fundamental to people’s daily lives, but not everyone in Bluefields has access,” said Roy, who added that coming up with solutions requires “identifying people’s needs and how you are going to provide those needs.”

While blueEnergy maintains a small number of researchers and interns, it relies significantly on its local staff, community members, and senior fellows, who administer day-to-day operations and constantly train and educate beneficiaries about proper usage of filters and how to inspect latrines.

During her two month fellowship, Roy and her team examined hundreds of filters. After surveying 330 filters in 16 different neighborhoods, installed five years ago, they reported some positive outcomes.

“Generally speaking, most filters were functioning well. They met five or six of the eight parameters we have established to test the efficiency of these filters,” said Roy.

In extreme cases, while water sources and containers tested negative for E. Coli bacteria, the filtered water tested positive. These results demonstrated potential areas to be addressed to avoid reactivation of contaminants as well as the need for more conducting more community training on proper usage of the filters.

Although Bluefields has a long way to go in terms of economic development, filters introduced by blueEnergy have had some impact. Stay-at-home mothers reported being able to start small cafeterias and eateries in their own homes, without the fear of endangering their families and customers’ health by serving unfiltered water. 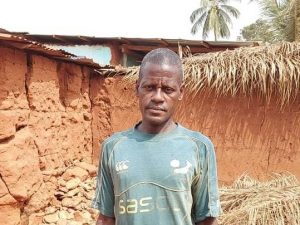 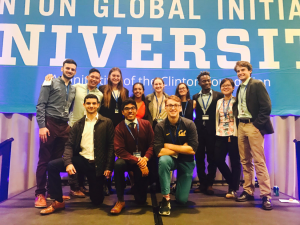 From the East Coast to the Bay Area, several esteemed Global Poverty and Practice Minor program alumni gathered in Blum Hall for a panel hosted