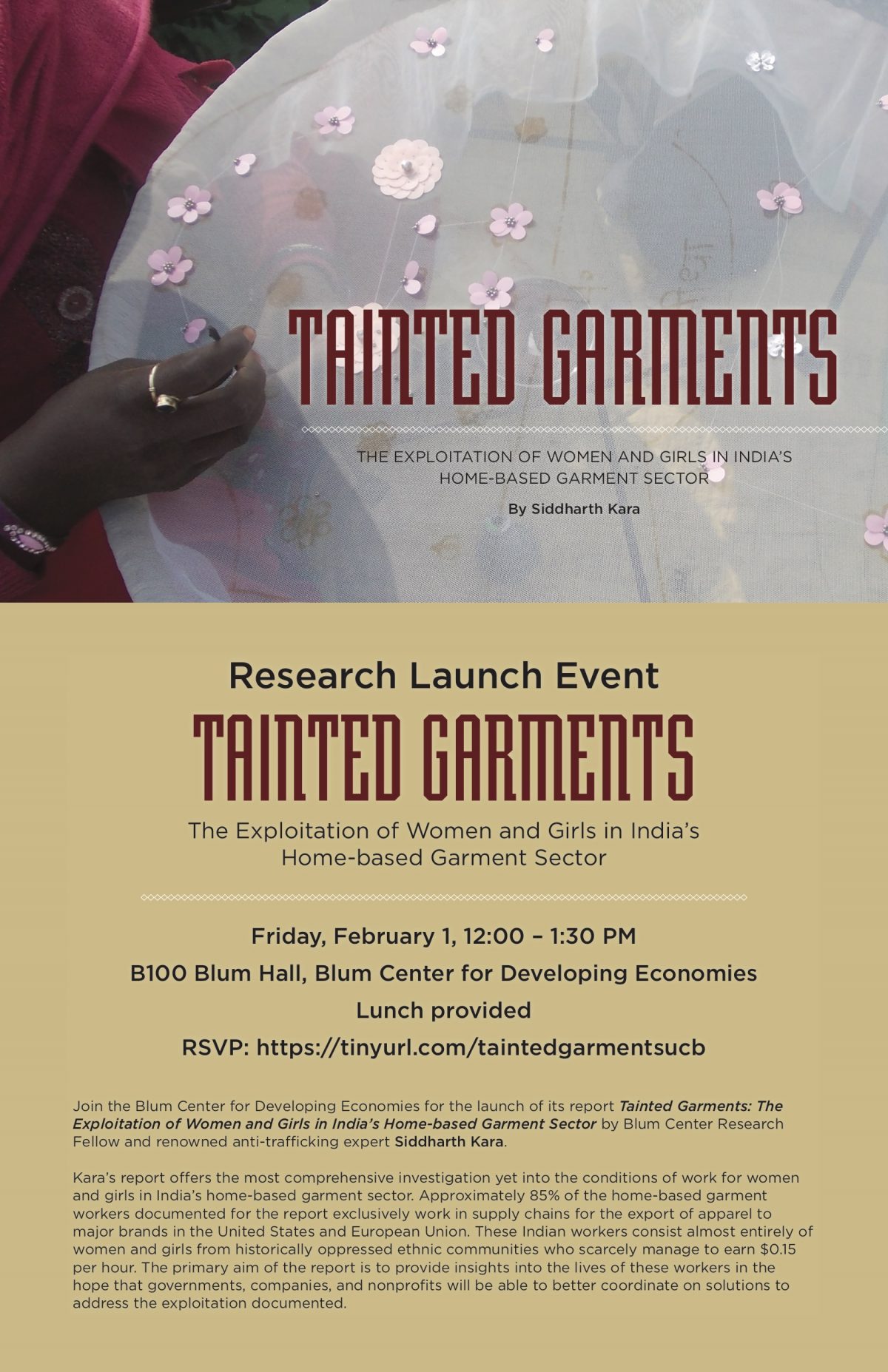 “They work in huts with mud floors, shacks with crumbling roofs, and if they are lucky, a semi-concrete structure that may survive this year’s monsoon floods. They are the women and girls in India who toil at the bottom of global garment supply chains, earning between $0.13 and $0.15 per hour sewing, embroidering, and adding the finishing touches to the clothes we wear every day.”

This is the way Blum Center Research Fellow Siddharth Kara describes the Indian home-based garments workers who are the subject of the recently released Blum Center report “Tainted Garments.” Kara spent the last two years documenting the conditions of homeworkers in India’s garment industry as part of a broader mission to investigate the exploitative labor conditions at the bottom of global supply chains—from electronics to carpets to seafood.

Based on the cases of 1,452 home-based garment workers in and around nine cities across India, Kara and his research team found more than 99 percent of workers who sew for major U.S. and EU brands did not receive state-stipulated minimum wages, more than 42 percent began garment work as children, almost two-thirds began the work under some form of duress, and more than a third suffered severe delays in their wage payments. Kara underscores that home-based garment work is completely informal—“not one worker had a written agreement for their work, not one worker belonged to a trade union, and only 0.1 percent of workers received any sort of medical care if they suffered an injury during their work. For many of the children, garment work comes at the expense of an education, ensuring that the cycle of poverty is passed from one generation to the next.”

At the February 5 publication launch at the Blum Center, Kara noted that few of the brands or companies who employ these workers are aware that “finishing touches” work is being outsourced to home workers, or of the conditions many home workers face. However, Kara was quick to point out that every supply chain has such workers—often women and children—who are invisible to the supply chain yet who enable the supply chain to function. For that reason, said Kara, “Companies must become aware of these people and the conditions under which they work and start treating them like employees.”

The report does not reveal the names of the brand name clothing companies that employ the workers. “That might lead to brands pulling out,” said Kara, “which could be disastrous for these workers and their families.” Instead, he—and fellow publication event panelists Nina Smith, president of GoodWeave, and Ryan Heman, investments manager at Humanity United—encouraged clothing companies to use their size and leverage with local suppliers to invest in improving transparency and worker rights along the supply chain. 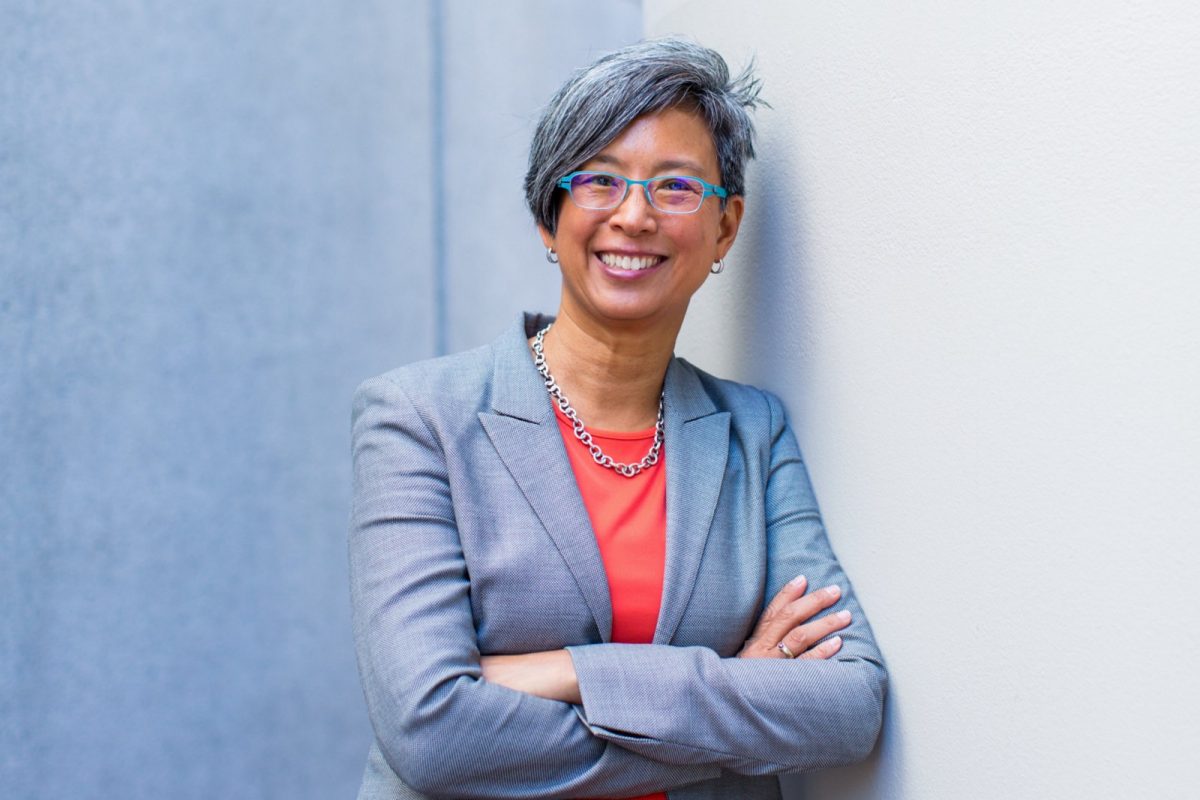 Chang is in a unique position to analyze how and why innovation works across sectors. In addition to working at USAID and Google, she has served as chief innovation officer at Mercy Corps, senior advisor for women and technology at the State Department, and director of product development at Intuit.

“Lean Impact is a strategy for maximizing social benefit in the face of complex societal challenges,” she said.

Chang presented three guiding principles for change-makers, nonprofits, and social enterprises to achieve social innovation: 1) Think Big–set an audacious goal to achieve exponential growth; 2) Start Small–run fast experiments to accelerate the pace of learning, save time and money, and minimize risk; and 3) Relentlessly Seek Impact–fall in love with the problem, not the solution, and accept failure as a natural part of the process.

For each principle, Chang provided examples from her book, which includes interviews with over 200 leaders of successful nonprofits worldwide.

Chang highlighted NexLeaf Analytics, a nonprofit that builds and deploys wireless sensors. NexLeaf’s goal was to increase the use of clean cookstoves to reduce harmful emissions in rural parts of India. To do so, the nonprofit installed sensors on the cookstoves to measure usage and found there was no correlation between self-reported usage and the actual usage; users had both underreported and overestimated their usage.

Through this example, Chang stressed that observing user behavior is far more accurate than asking hypothetical questions and talking to focus groups, as users will often say what they think you want to hear or inaccurately predict their own reactions.

Chang also highlighted a Kenyan company called Copia Global, which set out to make affordable consumer goods accessible to remote villages in Kenya. To get the company off the ground, the founder began testing what low-income villagers most wanted to buy. He asked: Would they be receptive to ordering from a catalog? What goods would they want? Which agents would be most effective? Though a series of iterations, the founder determined that people would order from catalogs, determined the most popular products, and identified the most effective selling agents. Copia Global now calls itself “the best of Amazon plus Fedex plus a healthy dose of emerging market expertise for underserved communities.”

Chang emphasized that scaling a social innovation is not easy. But she assured the audience that big goals and continual iteration are key.

“Be ambitious,” she told UC Berkeley students. “Don’t be afraid to set an audacious goal and relentlessly seek impact by falling in love with the problem.”