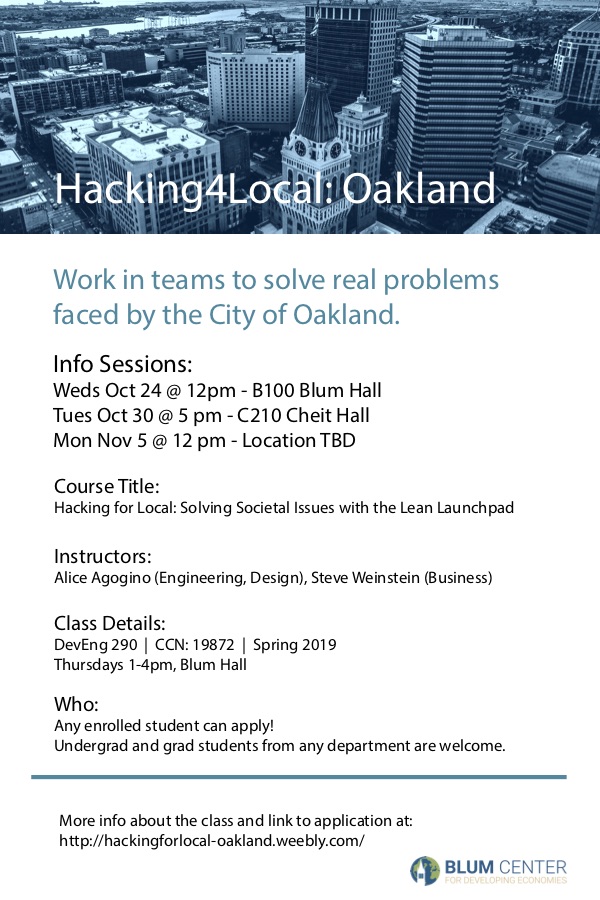 The 25 students enrolled in UC Berkeley’s newest class are shooting for more this semester than a good grade. In addition to earning an “A,” they intend to help solve the Bay Area’s housing shortage, prevent wildfires in the East Bay hills and slow climate change. 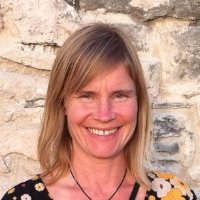 In 1990, at the age of 20, Kara Nelson found herself in a refugee camp in Zimbabwe, just months before the independence government lifted a 10-year ban on land redistribution. The UC Berkeley biophysics student was taking a gap year to see what life was like as a non-student, and the realities of what she chose to see hit her hard.

“For six months, part of my work was with refugees from the independence war who were living in an informal settlement just outside the capital city of Harare. I became exposed to the fact that they didn’t have access to any type of basic infrastructure we take for granted in the United States, including water and sanitation.”

Nelson, now a professor of civil and environmental engineering at UC Berkeley, didn’t realize then that water and sanitation would become the focus of her career. Yet when she returned to campus, she shifted her coursework toward more applied science and took classes in African American and peace and conflict studies, while looking for opportunities to connect the science she was doing to the issues she cared about. She came to realize that engineering had the set of tools for applied research that could address critical infrastructure challenges in the developing world.

At University of Washington, while earning a M.S.E. in environmental engineering, Nelson looked for classes on the intersection of development and engineering but they didn’t exist. So she created a summer class on water and sanitation in low-income countries with a group of fellow students and a few professors. The experience further confirmed her interests. And she told herself she would pursue a PhD only if she could do dissertation work outside the U.S. Although it took Nelson several years to put together the funding, research, and logistical pieces, the UC Davis PhD managed to spend 20 months in Mexico as part of a research group at the National Autonomous University of Mexico, exploring low-cost, low-energy wastewater treatment systems.

“In Mexico, I developed a contextual understanding of the similar challenges that low-income countries confront and how the problems change based on local drivers and conditions,” said Nelson. “The barriers to solving water and sanitation problems around the world are huge, and they can’t be surmounted with just money.”

Nelson recounted this from her office in Davis Hall, where she has a bird’s eye view of the San Francisco Bay, framed paintings of water scenes, and photos of her two sons. Nelson may be a leading scholar on global water and sanitation research, with more than 90 journal papers to her name and a resume that extends 23 pages, but she does not boast her achievements. She speaks in a measured cadence that indicates a habit for meticulous thinking. Among her recognitions are a Presidential Early Career Award for Scientists and Engineers (2003), a National Science Foundation CAREER Award (2003), an Award of Merit from the Water Environment Foundation’s Disinfection Committee (2011), and a Fulbright Fellowship in Colombia from the US Information Agency (2014).

Close to 30 years in water, sanitation, and hygiene (“WASH”) research have taken the professor from Oregon to India, Kenya, China, Ghana, Panama, back to Mexico, and around the United States. These time and travel commitments have made her wise as well as careful about how to make WASH services affordable and environmentally sustainable. As a new professor, she participated in a project in Mexico teaching rural communities how to build their own water treatment devices with locally available materials. This was in line with the philosophy of “appropriate technology,” an engineering approach popularized by German economist E.F. Schumacher that advocated human-scale, decentralized, and often village-based technologies for poor communities.

“This sounds like a great idea,” explained Nelson, “but who wants to spend every week for a month building a water treatment system for your house when you’ve got other priorities?”

Nelson advocates “aspirational technology,” the idea that development engineers like herself should be designing not for poor people, but for people. “Aspirational technology is what people want for meeting their drinking water or sanitation needs,” she explained. “They want it to be exciting the way a smartphone is exciting—something you are proud to share with your neighbors and in-laws and make you feel you’re creating a better world for your children. One of the shortcomings of the appropriate technology movement is that it was sometimes perceived as designing technologies for poor people, as if they were different than technologies for rich people and that poor people had different aspirations. They don’t.”

Nelson adds that these solutions, even if they are aspirational, must not require implementation and maintenance from individual households. A shortcoming of many appropriate technologies is that they rely on low-income households to, for example, purify their own water or safely remove human waste from their households, when this is not something expected of people in the Global North. Nelson advocates that when engineers design technologies—whether for densely populated neighborhoods in Bangalore or small towns in California’s Central Valley—they must think of a whole package of household services at an affordable cost.

Increasingly, Nelson’s applied research is focused on hybrid solutions to water and sanitation in industrialized and developing countries. That is because in developing country cities, centralized systems will likely never meet universal water and sanitation needs—and in developed countries,  the large, centralized, infrastructure-heavy systems are not adaptable enough to be environmentally sustainable.

Through the U.S. National Science Foundation Engineering Research Center ReNUWIt (Reinventing our Nation’s Urban Water Infrastructure), where Nelson leads the engineering research thrust, she is studying approaches to recycle wastewater in buildings to conserve both water and energy. Another project, in Kenya and started with her former graduate student William Tarpeh, involves recovering nutrients from urine for fertilizer. Nelson is also a leading expert on intermittent water supply, a ubiquitous problem in developing countries, in which drinking water pipes deliver water only periodically. And yet another project involves turning wastewater back into drinking water through a series of advanced treatment steps, with applications for Southern California and other water-scarce cities.

Nelson is also focused on using recycled waste water to irrigate food crops—both in the U.S. and in developing countries—because the looming food crisis is tightly connected to the unfolding environmental crisis. She explains that many of our food systems are not sustainable due to the runoff of fertilizer, which is polluting surface water and in some cases ground water. Nelson is convinced that across the globe hybrid water and sanitation solutions can improve livelihoods and reduce environmental pollution.

“In industrialized countries, we have great opportunities to offset more pristine waters by using recycled water to irrigate food,” she said. “In developing countries, about 10 percent of the world’s food is irrigated with wastewater, which allows farmers to increase their productivity, but it’s inadequately treated so it exacerbates public health problems.”

Nelson is the rare full professor under 50 who pursued doctoral work in engineering solutions for low-income communities and has made it a continued focus. As a result, graduate students have been flocking to UC Berkeley to follow in her footsteps. They are among the first cohort of “development engineers”—engineers who pursue interdisciplinary technological interventions in low-resource settings.

Nelson’s development engineering PhD students who have gone on to academic careers include: William Tarpeh, an assistant professor of chemical engineering at Stanford University whose Kenya-based work focuses on extracting nitrogen from urine for producing liquid fertilizer; Emily Kumpel, an assistant professor of civil and environmental engineering at University of Massachusetts, Amherst, whose work focuses on water quality monitoring in Sub-Saharan Africa; and Andrea Silverman, an assistant professor of civil and urban engineering at New York University, who studies low-cost wastewater treatment in sub-Saharan Africa. In the NGO sector, she has mentored: Fermin Reygadas, executive director and co-founder of Fundacion Cantaro Azul, a nonprofit that develops and implements point-of-use ultraviolet water disinfection solutions in Mexico; and Ashley Murray Muspratt, founder of Pivot, a dual sanitation and renewable fuel company in Rwanda.

Said Nelson: “I feel strongly that the field of development engineering has to grow dramatically if we’re going to impact the development challenges around the world. Right now, we have the vast majority of our researchers at top universities focusing on issues that are important but often not the biggest priorities for the world’s low-income populations. If we’re going to make progress on the Sustainable Development Goals, we need many more researchers in the science and technology fields to be working on problems that people in low-resource communities face.”

Nelson is busy these days. In addition to her research and teaching commitments, she is the Associate Dean for Equity and Inclusion for the College of Engineering. In this role she is leading initiatives to diversify the student body and faculty in engineering, such as the Advancing Faculty Diversity Initiative and the pipeline program NextProf. Another major emphasis is improving equity and climate across the college so that everyone has the support they need to reach their potential.

She said what continues to motivate her in the classroom is helping students think about water and sanitation from a systems perspective—connecting the technical and societal pieces and showing how engineers need to be working in teams that have expertise in public health, agriculture, energy, and policy. Along with Research Engineer Dr. Jennifer Stokes-Draut, she developed a popular class in 2017 called “Water Systems of the Future,” which aims to provide tomorrow’s water leaders with the skills needed to overcome barriers to innovation in the risk-averse water sector.

“We all aspire to improve livelihoods, so we should be designing technologies that truly meet people’s needs and expectations,” said Nelson. She paused to carefully consider her words: “I’m a techno optimist. I think our ecosystems are in crisis. But I do think technologies will help us get out of the mess that we’re in, if we can work together to transform our institutions and political will.”