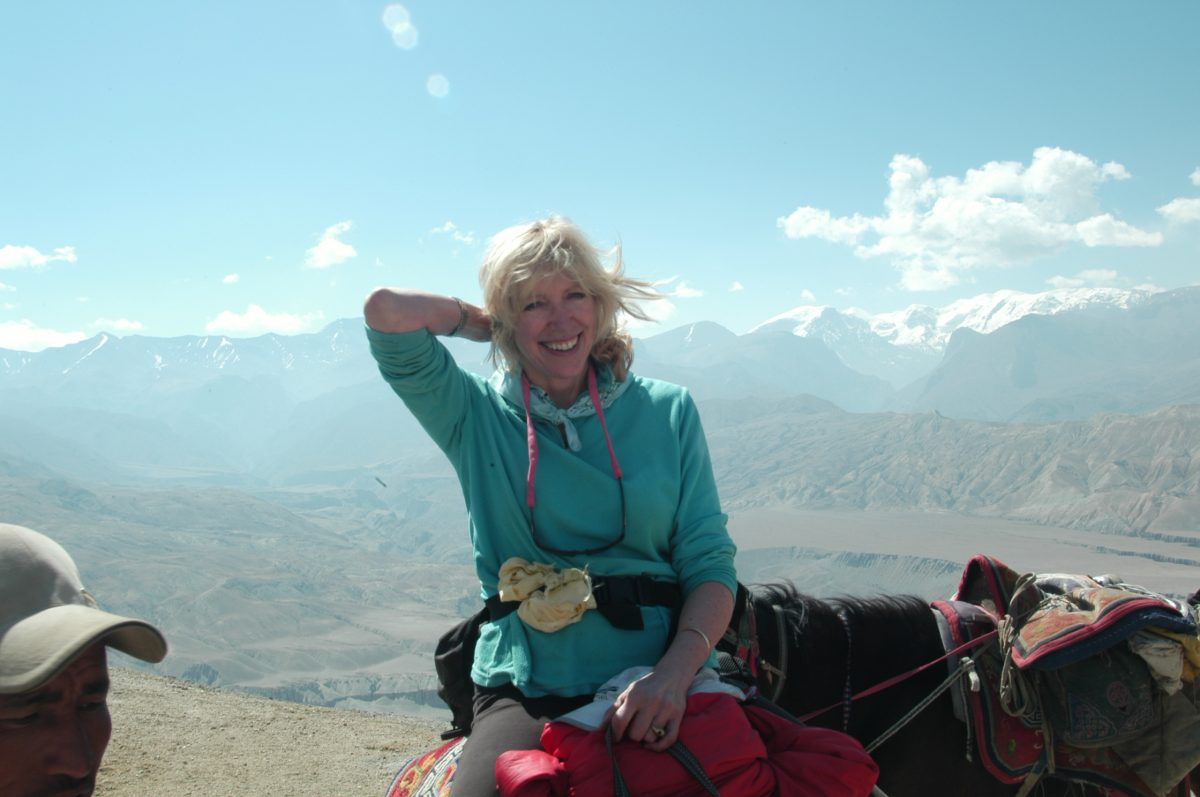 Erica Stone, who has served as president of American Himalayan Foundation for close to 30 years, came to her job through an unusual path.

After graduating from Cal with a BA in Sociology she met Gil Roberts, an Alta Bates emergency room physician whom she describes as “part climber, part doctor, part Hells Angel.”

“Gil said, ‘Would you like to go camping?’ I was smitten so I said, ‘Sure.’ Then I asked ‘Where?’ He said, ‘Everest Base Camp,’ and I said, ‘OK.’ So, we went camping. We walked from Kathmandu to Everest Base Camp. This was 1991; it took a month. We fell in love and then we went back to Nepal a lot.”

Roberts was among the first Americans to climb Hidden Peak in the Karakoram range in Pakistan and almost lost his life scaling Everest in 1963, when a 30-foot-high slab of ice tore loose and killed his climbing companion. Through the climbing community, he later met UC Regent Richard Blum, who started the American Himalayan Foundation (AHF) in 1981 to alleviate the widespread poverty he had witnessed on his trips to Nepal.

“Gil was on the board of AHF,” explains Stone. “I went to a meeting or two. At one point, Richard was looking around for someone to grow it because it was tiny, with revenues of $60,000 per year. By then I had an MBA from the Haas School of Business and was working as a consultant. At first, I was reluctant but then I thought, Why not?  So, I traded my crampons and duffle for a laptop and garment bag.”

Stone’s adventurous spirit and sharp business skills have been a driving force behind the American Himalayan Foundation’s steady expansion, which now gives away around $4 million a year. The nonprofit has a diverse portfolio of programs—from supporting girls’ education and restoring ancient temples to building health clinics and protecting tigers. Its staff is intensely loyal; in addition to Stone’s 29 years at the helm, Vice President Norbu Tenzing has been with AHF for 27 years, Nepal Country Director Bruce Moore for 20 years, and Deputy Director Charu Pradhan for 17 years.

Stone says much has changed—particularly travel to and communications with one of the world’s more inaccessible regions—and much remains the same. “We had a startup feel about us in the early days and that has not changed,” she notes. “If you want to operate in Nepal, you need to be willing to pivot at any point and in any direction, because it’s not a country that you can predict.”

The foundation’s reaction to the earthquake in 2015 illustrates this flexibility. The Gorkha earthquake killed nearly 9,000 people and injured almost 22,000, which meant that AHF had to continue programs and add new ones in a country that was literally convulsed. Thanks to its educational programs, AHF could mobilize its local partner networks on the ground to help distressed students and their families. AHF and it partners deputized teachers to distribute “blue bags” with food, water, clothes, toothbrushes, and other essentials. The foundation also built 54 temporary schools and later rebuilt or repaired a hospital, elder homes, and schools.

Stone’s approach to philanthropy is marked by this kind of practicality: do what makes sense, meet people where they are. Although its headquarters are in San Francisco and AHF employs a staff of six in Kathmandu, the foundation is largely leveraged—meaning it always works in partnership with local people and organizations to identify, implement, and improve its programs.

“In the early years especially,” relates Stone. “I would go and look for local rockstars—people who are driven, passionate, savvy, and can actualize. We would sign onto their vision and help them build capacity.”

STOP Girl Trafficking is one the initiatives that has grown from a local rockstar’s vision. In 1993, the AHF board—which now includes dignitaries like former Ambassador Peter W. Bodde and celebrities like Sharon Stone—began to hear rumblings about rural Nepali girls being sex trafficked, largely to India. Stone convened a meeting of local people working against trafficking at Malla Hotel in Kathmandu. Eighteen people showed up, including Nepali doctor Aruna Uprety.

“Aruna was clearly the star,” remembers Stone. “She had seen Nepali girls trapped in brothels in Mumbai. They said to her, ‘It’s too late for us. What you need to do is go back and stop other girls from coming here.’ Aruna had this vision for preventing girl from being trafficked—it’s cheaper, easier, and prevents so much suffering. She led us to keep girls in school, and to educate them so they are more valued in their families.”

The American Himalayan Foundation started with 54 girls in 1997 and now supports 12,000 females in 500 schools annually, with 25,000 still in school or having graduated. Funding is always challenging, but STOP Girl Trafficking resonates with people and has been easier to fundraise for than some other AHF initiatives, says Stone. Richard Blum has been very supportive.

Another local star identified by Stone and her colleagues is Dr. Ashok Banskota, an American-trained pediatric orthopedic surgeon who Dr. Gil and Stone met in Nepal in 1988. He asked AHF for a $4,000 donation to buy an autoclave sterilizer for his small clinic. In the 1990s, health clinics in Nepal were ill equipped and poverty was rampant—with an estimated 80 percent of the population living on less than $2 per day. A child’s serious injury or disability could debilitate an entire family and destroy their life chances. Dr. Banskota was among the few doctors with the skill to fix club feet, twisted spines, and fractured arms and the passion to do it for low or no cost.

“I started to go back and see Banskota,” remembers Stone. “He moved from that clinic to another one in a rented house in Kathmandu. [Blum’s wife] Senator Dianne Feinstein came and saw the clinic and said, ‘Richard this is great stuff. He’s astonishing. His dedication to his kids is amazing.’”

Over the past three decades, AHF has supported Dr. Banskota’s Hospital and Rehabilitation Center for Disabled Children, including helping to build a new 100-bed hospital in Banepa, just outside Kathmandu. Banskota’s son, Bibek, has followed in his father’s footsteps as a pediatric orthopedic surgeon and has joined him at the hospital that now employs 230 staff and provides 25,000 consultations and 2,300 surgeries annually. Over 95,000 children have been healed since AHF’s first visit.

Stone may still see herself as an accidental nonprofit president, but she says she never changed jobs because of the draw of Nepal, its people, and especially its vulnerable girls. Although she grew up far from the Himalayas (in Montreal), she has been a longtime student of female empowerment through her practice of Taekwondo, a martial art she took up as an undergraduate at UC Berkeley after being stalked on its streets. She has 5th degree black belt and for 35 years has run an all-women studio in Berkeley as a community service.

“Empowering women is really important,” says Stone of her JLAG/Wild Crane Rising martial arts studio. “I have heard it said that men are afraid women will laugh at them and women are afraid that men will kill them. How do we teach women to defend themselves, not just physically but psychologically? If you neutralize the balance of physical confidence between men and women, it makes a lot of other stuff more possible.”

Stone is psychologically astute about cultural differences as well. She was quick to realize that American approaches to work don’t translate well in the Himalayas. “In South Asia, if people don’t see you, they don’t believe in you,” she says. “You have to show up and sit down and talk to them. That’s the only way I know how you can have a trusting, lasting relationship. So Norbu and I meet with every single partner once or twice a year.”

The doctor-climber who introduced Stone to Nepal died in 2000 to cancer. Yet she says the country Gil Roberts brought her to remains reverential. “When I first went,” remembers Stone, “we were coming into the Kathmandu Valley by plane. It was dusk and I looked down and there was not much electricity in the city, but you could see all these little lights. People were cooking over fires. It was completely magical. I just fell in love. I’ve been about 50 times since, and I’m still in love.”