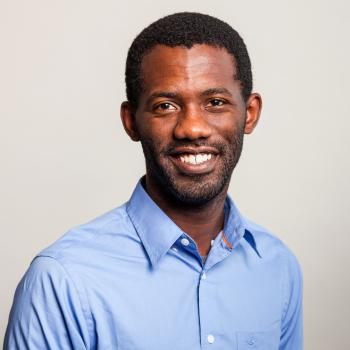 When Will Tarpeh was an undergraduate at Stanford University, he didn’t know if it was possible to be a research engineer who works in the developing world. His global interests started in high school, when he learned that more than 2 billion people lack access to adequate sanitation. And they expanded throughout college, as he studied chemical engineering and African studies and interned at Sarar Transformación, a Mexican nonprofit focused on sanitation. “That’s when I got interested in ecological sanitation,” he said, “which is just the idea of using waste as fertilizer.”

How did Development Engineering shape your academic work in global sanitation?

It was extreme serendipity. Development Engineering started the year I got to Berkeley and made a lot of things possible. It gave me a formal structure—having a chapter in my dissertation that was explicitly about Development Engineering and about my sanitation work in Kenya. If it weren’t there and if I hadn’t gone to Berkeley, I might not have explored this part of my academic identity in as much detail. Now it’s such a crucial part, I can’t imagine being an academic without it.

What else drew you to Cal?

I wanted to work with Professor Kara Nelson, because she has a process engineering focus for achieving sanitation goals. She had a Gates Foundation grant that was part of their Grand Challenges exploration, and she and a post-doc were working on the idea of using ammonia from urine to disinfect feces. I tagged along and went to the Gates Foundation’s Reinvent the Toilet Expo, which was my dream at that time. I got to see all these cool toilets, and realized there was a large community of academic researchers who shared my interests.

How did your own research develop?

My first year in graduate school I reviewed journal papers and focused on unanswered questions. That’s when we landed on urine and recovering nitrogen. We chose urine because there were lots of motivations for separating out urine and feces. And from a chemical engineering perspective, we thought nitrogen from urine could be useful because nitrogen fertilizers are central to modern society—they’ve helped feed a growing population. We focused on what we could borrow from other subfields, such as the extraction of nitrogen from wastewater in the U.S., and also on what we could dream up on our own to address sanitation access.

How do you see your academic contributions?

My first paper as a PhD student compared materials that adsorb or concentrate nitrogen in urine. We compared four different adsorbents. Then we took the work to the field and published it in the Development Engineering journal—which meant characterizing the technology in lab, bringing it to the field, and in between looking at the operating and design parameters to show the trajectory as a contribution. Another contribution is in electrochemical nitrogen recovery. Electrochemistry and wastewater treatment have met in earnest over the past decade or so. I’ve been part of the first group of people to apply electrochemistry to urine and to extract nitrogen in a new way we call electrochemical stripping. It’s set some records in terms of nitrogen recovery efficiency and resulting energy efficiency.

You said in a previous interview that “a lot of the solutions to the world’s most pressing problems are in the minds of children who are simply preoccupied with survival.” Why are children a place to understand the world’s grand challenges?

Grand Challenges are really interesting because they are descriptive in nature. Through them, academics, UN representatives, and others try to describe a reality that millions of people experience. But I think the expertise really lies in the communities who experience the problems. We as scientists can try to lend our technical expertise in other communities—but the people who live in those communities are the real experts. That’s how I approach my work. This comes in part from growing up in a low-income household in the U.S., and knowing that resource-constrained communities have valuable skills and life experiences to solve their own problems.

How new is the field of Development Engineering?

It’s not new in some ways. People have been doing this kind of engineering for as long as there’s been inequality. What’s new is that we’re studying how we do it and thinking about better ways to do it. Ten years ago, it was news to people that you need to engage the community when you design for it. It really was. We would learn about implementation failures all the time—and be surprised that engineers didn’t remember to ask people about their sanitation needs and, as a result, the new toilets got turned into closets because they had roofs. Now, I see the frequency with which that kind of thing is reported going down, which tells me there’s value in the Development Engineering enterprise. It formalizes things in a way that engineers who don’t focus on development can appreciate.

How important is field work to Development Engineering?

It’s a crucial site of learning. Going back and forth into the field has been extremely valuable to my research. Maybe the traditional model of humanitarian engineering was: you develop something in the lab about a problem in a developing community; you say, I have an answer for that; you characterize it in the lab; and you go out and say, here it is. But then you realize you were designing for constraints that didn’t reflect reality in the community. Development Engineering is about iterating. Over the course of my PhD, I went to Kenya and worked with Sanergy. That’s when I realized they were collecting urine but not yet creating value from it. Then I tinkered in the lab on the urine research, and spent the next four years going back and forth to see what worked and made adjustments, which allowed for the rigorous study we expect in academic communities.

Is being a Development Engineer a liability in academia?

I don’t think it is the liability it was five or ten years ago. It’s attractive now to do Development Engineering because of the huge impact you can have. Another part of this is students are demanding training to try to solve development problems. I have engineering students who say global sanitation really gets them moving and motivated. From a disciplinary perspective, Development Engineering is one of the ways we stay relevant to our students and to the Grand Challenges that people are facing around the world.

Are you seeing more academic engineers like yourself who do applied research in developing countries?

I do feel there’s a generation of professors tying loose ends together and thinking about ways to leverage skill sets that are no longer within one discipline. Alice Agogino always talked about the wicked problems that refuse to be classified in one silo and that demand multiple approaches. Many professors now have multiple skill sets and are oriented toward solving wicked problems. I feel I’m part of this, combining electrochemical engineering, global sanitation, and resource recovery.

Do you think it’s significant that most of your mentors have been women?

Yes, and that was a recent epiphany. After Berkeley, I did a post-doc at University of Michigan, where I also was advised by two women—Nancy Love and Krista Wigginton. Female professors have impacted me, particularly by seeing the extra obstacles they have to go through and the strategies they use to succeed. Being supportively mentored by advisors who are different than me has prepared me to support students from diverse backgrounds in my own career.

How do you advocate for STEM inclusion and equality now that you’re a professor?

I recommend students and colleagues for awards, formally by writing recommendation letters and informally by suggesting people for collaborations and so on. Also, being a black male, I try to serve as a role model for students. At Stanford, I give lunch talks with minority or under-represented students. It doesn’t take a lot of time and it could be a high impact intervention for one of them. I also work to design impactful programs. Kara [Nelson] and I were involved in the Graduate Pathways Symposium at Berkeley for underrepresented minorities to apply to grad school. I also make sure when I work in Kenya, I give author credit to the local researchers on my academic papers.

When will we achieve global sanitation?

There are some estimates that low and middle-income countries are not going to fully address the problem by 2050. One argument is that we won’t get there because of the barriers to creating centralized wastewater treatment facilities. But there are other options, namely resource efficiency. A paper I’m working on argues that if we take resource recovery one step further and bake sustainability into every process we do, we can minimize the inputs for everything we produce. The paper encapsulates the idea of the circular economy, of resource recovery. Of course, being a urine researcher, I believe separating urine has a role to play in that. I believe imagining the future helps us engineer toward that future.