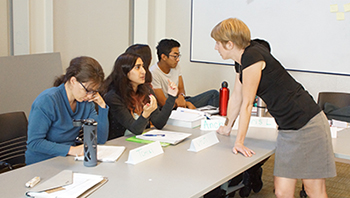 Some people have called it the personalization of higher education. Others see it as the natural evolution of pedagogy at a world-class public research university. Lina Nilsson doesn’t disagree with either of these interpretations, but she definitely sees on-campus, in-class social impact work as “the changing face of education.”

“Connecting academic learning to real-world issues and problem solving is something that students are demanding,” said Nilsson, director of innovation at Blum Center for Developing Economies. “And students can’t be expected to pull together all the pieces needed for their ideas to have impact. In addition to subject-matter expertise, they also need coaching and mentorship. They need to learn by example. And there’s no reason that can’t be made available to them at the university.”

These are among the reasons Nilsson launched a new Blum Center-sponsored course this fall called “Social Innovation OnRamp.” Created in part to provide a space to accelerate the projects of UC Berkeley students who have won the prestigious Big Ideas@Berkeley contest, the course provides an overview of a broad range of skills for the creation, evaluation, implementation, and growth of early-stage projects that serve the public good. The course also comes with an OnRamp website that provides resources for budding social innovators to find funding, startup and training programs, and recommended reading.

In its very first offering, the OnRamp course quickly oversubscribed. In October, UC Berkeley’s Jacobs Institute for Design Innovation awarded the course a teaching grant. Several of the students, such as Political Science Major Michael Alexander Clark, have unabashedly said, “It is the best class I’ve taken at Cal.” Part of the energy in the class comes from Nilsson herself, who while a post-doc in bioengineering at UC Berkeley, created a startup called Tekla Labs, which provides guidelines for medical professionals in developing countries to build lab equipment using locally available supplies. For this, Nilsson was named a MIT Technology Review Innovator Under 35. But Nilsson herself admits that she and her Tekla Labs colleagues “could have done a lot of things better, if we had learned a few things earlier.” This need to learn from both successes and failures has shaped the theory and the practical drive of the OnRamp course.

The OnRamp’s high-energy atmosphere also comes from the students themselves. They are a mix of graduate and undergraduate students representing departments as diverse as business, political science, computer science, psychology, information management and systems, mechanical engineering, applied mathematics, anthropology, environmental economics, energy resource, and peace and conflict studies. Some projects focus on mental health; some on agriculture; others are pushing along ideas that might “innovate” or “disrupt,” to use the parlance of social innovation, student career support and homelessness. About half the student teams in the class are focused on U.S. social impact, and the other half on developing countries.

Along with Nilsson, Course Facilitators Kate Fenimore and James Roditi, and a dozen guest speakers serve as both cheerleaders and cautioners for student innovation. “What we try to say is: ‘Here’s a scaffold of skills and insights you need to master and evaluate if you want to have meaningful impact as a social entrepreneur,’” explained Fenimore. The course presents 12 such scaffolds, including: framing and pitching ideas; developing a theory of change; identifying, understanding, and communicating with stakeholders; understanding, maximizing, and measuring social impact; network, outreach, and communication; social impact concepts; product/service prototyping and design; execution and logistics; business models and legalities; and knowing when to pivot or quit. Every week, a practitioner engages the students in an hour-long discussion on these scaffolds, with the possibility of additional mentorship.

John Romankiewicz, a dual master’s degree student at the Energy & Resources Group and the Goldman School of Public Policy, said he enrolled in OnRamp to move along his idea for The Food Bikery, which seeks to deploy a low capital, low footprint alternative to food trucks. He reasoned that food trucks, which are now a $1 billion industry in the U.S., may not be as green as many people think. They cost about $50,000 to outfit with a kitchen and generator, whereas food bikes cost around $5,000, and generate much lower emissions, take up less space, and serve as a more affordable pathway for budding chefs to showcase their talents. Eventually, Romankiewicz would like to see co-ops of food bikes in relatively flat, temperate cities like Berkeley and Austin that could share food storing and prepping facilities.

To put his idea into action, he and Jason Trager, a Cal mechanical engineering PhD student, built a prototype in 2013 made from recycled materials for a 150-pound, two-wheel trailer. They outfitted the trailer with a griddle and propane tank and rigged it to a standard street bike. Romankiewicz, who goes by the moniker “Sustainable John,” began to show up at parties and make Jian Bing, a Chinese egg crepe garnished with green onion and cilantro that he mastered while living in Beijing. He wrote a proposal for The Food Bikery, entered it in the Big Ideas contest, and won a $2,000 prize in May 2014. Two weeks later, he won another $2,000 prize from a food company called So Delicious, which was running a small sustainability grants competition on Twitter. “I have a minimum viable product,” he said. “I know it works. What I don’t know is if I can get around the regulatory issues.”

That’s where the OnRamp course comes in. Romankiewicz said the OnRamp has forced him to refine his pitch, research the regulatory hurdles for food bikes—which like food trucks would need to meet health and food sanitation requirements—and analyze the financials. He estimates that food bike owners could sell 30 to 40 meals per shift, taking in $200 to $400 in revenue, which, he said, “would come to about $25/hour, well above the minimum wage earned by kitchen workers.” Right now, the project’s greatest hurdle is refrigeration and sanitation. “Nobody wants to carry a refrigerator on their bike or drag a generator through the streets,” he said. So he needs to argue to city and county officials that food bikes should have a four-hour operation window, during which time a bike cook could load his trailer, arrive at his location, cook his meals, and call it quits before any food spoils.

The OnRamp class has served a similar prod for Tchiki Davis, a NIH-funded doctoral student in psychology. She has been working with her father, a software engineer, on a series of online games that train young people to focus on positive information. Davis is among a growing group of psychology researchers who believe that happiness, much like math or music, is a skill that can be learned—and that positive cognitive stimulation, such as looking repeatedly at a sea of smiling faces, can reduce stress. Her Lifenik games are based on peer-reviewed papers by psychology scholars like Derek M. Isaacowitz of Northeastern University and Mark W. Baldwin of McGill University, who have conducted repetitive visual training tests that have been shown to increase self-esteem and reduce stress.

“So much of our behavior is socially engineered in negative ways, but we can change our engineering,” said Davis. “Most people know that if we can retrain ourselves to regularly exercise, then we will improve our physical health. But it is also true that if we retrain ourselves to regularly think about the world in more effective ways, then we will improve our emotional health.”

Like Romankiewicz, Davis is a Big Ideas contest veteran seeking practical guidance. “I have the research training,” she explained, “but not the business training,” adding that what she has found in the OnRamp classes is quite different from for-profit business workshops. “My greatest hurdle is not necessarily understanding the market for the games,” she said. “It’s making sure the games are psychologically effective. It’s balancing the social impact and scalability aspects of the project.”

Davis is currently applying for a $450,000, two-year NIH grant to help build and test Lifenik games. Like her teacher Nilsson, she doesn’t intend to use her doctorate to pursue a tenure track academic career. “I want to turn research findings into actionable, user-centered products, tools, and interventions that improve people’s quality of life,” she said. “Right now, this project is my passion, and I intend to pursue it.”