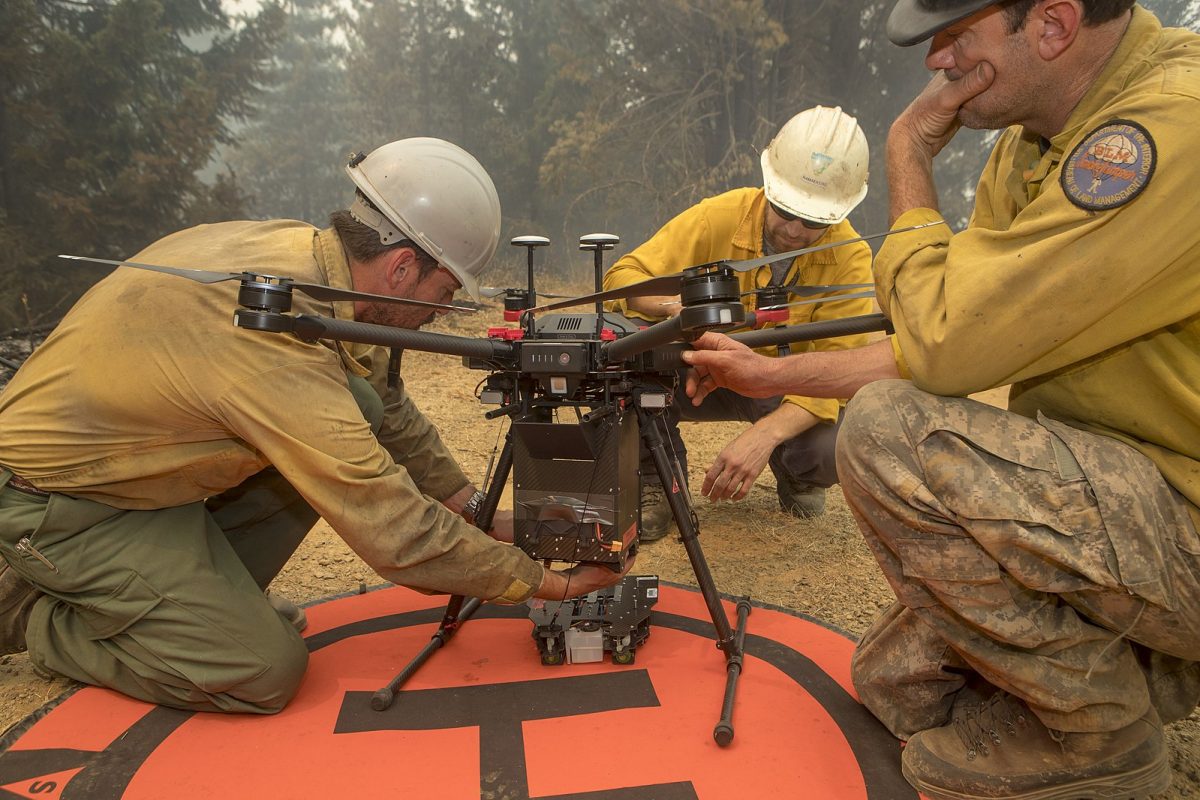 When Rachel Dzombak and Vivek Rao began planning for the spring 2020 Development Engineering course “Innovation in Disaster Response,” part of their motivation was to get students to think about the use of technology during past disasters. But by early March, it was clear to Dzombak and Rao—who both earned PhDs in Engineering at Cal, have expertise in design and innovation, and lecture for the Blum Center and the Haas School of Business—that the COVID-19 pandemic was increasing the relevancy of their class in ways no one could have predicted.

For their 23 students—comprising even shares of graduates and undergraduates, technical and non-technical majors, and women and men—determining appropriate technological interventions to disaster-driven problems became visceral. And as the class moved online, connected by Google and Zoom instead of open studio space, the students observed how all manner of organizations were struggling to use technology to protect lives and livelihoods due to the fast-moving coronavirus.

Ethan Stobbe, a Master of Engineering student, recounted that the class started with different readings about drone technology. One reading was written for and by engineers whose view of drones was promotional and laudatory, and the other was written by and for government employees who warned about public policy problems presented by unmanned aerial vehicles.

“I realized there was this massive disconnect between the people who develop the technology and get excited about it and push it,” he said, “and the people who have to use technology to make life in a disaster zone more bearable. That’s the beauty of this class—to see both sides—and to understand how to bring technology that’s less than a decade old into a disaster response zone.”

Stobbe was assigned to the “cash disbursements” team with a fellow engineer and two lawyers. They included: Karen Olivia Jimeno, a Master of Development Practice and Fulbright student from the Philippines; Mozheng (Edward) Hu, a Master of Engineering student focused on product design from China; and Ifejesu Ogunleye, a Master of Development Practice student who trained in law at University of Manchester and the Nigerian Law School. As they conducted interviews about cash disbursement with representatives from FEMA, Give Directly, and other organizations, they were guided by Dzombak and Rao not just to focus on the mobile technology, but on “framing and reframing” their understanding of how to make cash disbursements more effective.

The team’s first framing question was: How might we help streamline the disbursement of cash relief while maximizing its impact in disaster response? This prompted the students to question how the disbursement process works, why particular steps in the process are difficult, which organizations are the largest, and what existing standards govern the field. After conducting several interviews with practitioners, they learned that cash allocation can be enhanced through crowdsourced information and public accountability, but that targeting people is a challenge and enrollment and verification takes time. So they reframed their question to: How might we speed up the distribution of cash transfers by improving the enrollment of and verification process of disaster survivors?

The team’s final idea, which included a prototype website presented over Zoom in early May, was “biometric pre-registration” along with a policy guide to address legal concerns. The idea was to compel individuals in flood, hurricane, and other disaster zones to pre-register their biometric information on a website, in order to receive cash disbursements more easily in the event of a calamity. The point, argued the team, is to work around the problem of identification, as driver’s licenses, social security documents, and birth certificates often disintegrate in disasters. During their final presentation, the team acknowledged how seeing the rollout of the CARES Act, in which tax returns were used as a verification method, validated the need for solutions that enable quick access to cash for citizens.

Dzombak and Rao see the educational approach they offer to the cash disbursement and other teams as part of the emerging discipline of Development Engineering. “Development Engineering embraces complexity as a sub-discipline in itself,” explained Rao. “A lot of ways that design-based problem solving or technology-driven problem solving is taught—the problem isn’t engaged in a multi-dimensional way.”

Dzombak underscored that although the course teaches design methodologies, “The actual project is the focus and outcome of the class. The projects themselves demand that one builds technical and social fluencies and specifically how to move back and forth between the two to solve problems that matter.”

Dzombak feels strongly that STEM education needs more problem contextualization, more emphasis on ethics, and more rigor around collaboration and teamwork. She was drawn to Development Engineering during her PhD at UC Berkeley because she wants to see academic inventions tested and applied but also because she believes that well implemented technologies, devised in an interdisciplinary and collaborative way, can improve and even save lives.

Rao explained that there is a long orthodoxy in higher education that you must learn theory before exploring applied technologies or solutions—an orthodoxy that stems from the need for deep knowledge before tackling complex problems. “But there is also an urgency to many problems,” said Rao. “Students have a hunger for them and there are many ways to contribute to problems before you have a PhD in a specific field.”

Rao noted that the accessibility of technology is changing who gets to intervene in disasters and how. “The ability to manufacture a mechanical part would previously have required a high degree of fluency in several knowledge areas and toolkits,” he said. “Now, a rough prototype of that  product can be designed and built with a credit card and a few clicks. In many cases, the learning curve on technical tools has eased to the point where you can engage with tools and theory simultaneously and cater to students where they are.”

Dzombak noted that the augmented reality and data visualization sessions of their course would not have been possible four years ago when she and Rao were working on their doctorates. “Every student would have needed a background in programming and hardware in order to engage in that space. But given where toolkits are now, students were able to download software, do some reading, and then engage in a meaningful way.”

Since technologies will alway be advancing, Dzombak and Rao believe there is a growing space for people who are tech savvy but not tech specialized and can frame questions while leveraging the latest tools. “We’re trying to teach students how to learn how to learn in a very explicit way,” said Dzombak. “Because of the way jobs are shifting, people are going to be forced to get up to speed on new technologies and figure out how to use them to tackle problem areas.”

The student team that explored drone imagery is an example of this approach. They were excited to apply drone technology to fire mitigation in California. But after talking to fire chiefs, image processing researchers, and drone operators and designers, they surfaced several problem areas in which they did not have the expertise to make a contribution. For example, they knew that one of the challenges in using drone video footage during disasters is how best to parse the massive amount of data generated. And they also knew that drones suffer from flight mechanics and battery power issues during disasters, but those issues are best handled by drone manufacturers. Where could they make an impact?

One area where they found less activity is how to leverage public and private drone operation after the first hour of a disaster. The “Rapidash” prototype—developed by Master of Development Practice Student Aaron Scherf, Master of Engineering Student Wai Yan Nyein, Cognitive Science Student Meera Ramesh, and Data Science Student Jinsu Elhance—is an app that enables public and and private drone operators to collaborate during disasters by providing maps of high vulnerability areas and access by firefighters to this information. The idea is to get firefighters crucial information about the direction and density of a blaze as soon as possible and especially when public drones are too far away.

Katie Wetstone, a Master of Development Practice student who was assigned to the “disinformation” team, said that this kind of idea formation has been a strength of the class. “We were given a structured way to process information after interviews and organize different insights,” she said. “This approach is different from other courses, in that we have more time to research and understand a problem space rather than jumping to a solution.”

Wetstone said it wasn’t until the last third of the class, after interviews with Alex Diaz at Google.org and Chris Worman at TechSoup, that her team homed in on the idea that disinformation is a “public sector problem in a private sector space.” They also realized that immediately after a disaster there is an “information vacuum period” when a lot of disinformation spreads, making people vulnerable to news that increases anxiety and bad decisions.

“This whole problem is a balance between education, technology, and policy,” said Master of Development Practice Student Sadie Frank. “Until the policy mechanisms around enforcement and regulation of social media change, or until private social media companies make significant personnel investments, our best approach might be to teach people how to recognize and avoid disinformation.”

During the final projects showcase, the disinformation team presented “Compasio,” a downloadable device extension that filters potentially inaccurate information on social media through pre-verified accounts and geolocation. The software essentially warns users when information is suspect or unverified.

Dzombak notes that “Innovation in Disaster Response” is not meant to jumpstart social enterprise ideas, such as new apps and web services, though it might. “The training is meant to prevent unintended consequences once students go into the workforce. That’s why we spent a lot of time on critical thinking, ethics and values, decision-making,  and teaming.”

Deniz Dogruer, an Engineering Education PhD Student and COO of Squishy Robotics, who served as the graduate student instructor for the course, noted that the range of disaster-related problem spaces students explored—drones, disinformation, evacuation, disaster documentation, and cash disbursement—made the course particularly complex to teach but also advantageous for development engineering training.

Although the COVID-19 pandemic that forced the course online gave faculty and students a chance to consider the importance of technology during disasters, Dzombak said it’s been a “mixed bag.”

“In some ways, it gives students an excellent way to connect with their learning. The disinformation team, for example, was inundated with so many examples of how their problem can manifest,” she said. “On the flip side, so many people think the future of education is purely online. But the intangibles that we’re trying to teach—collaboration, peer-to-peer learning, process iteration, emotional connections—are just drastically changed. I think the irony is that solving complex societal problems requires people collaboration as much if not more than advances in technology. We need to be present with each other, not just with the machine.”