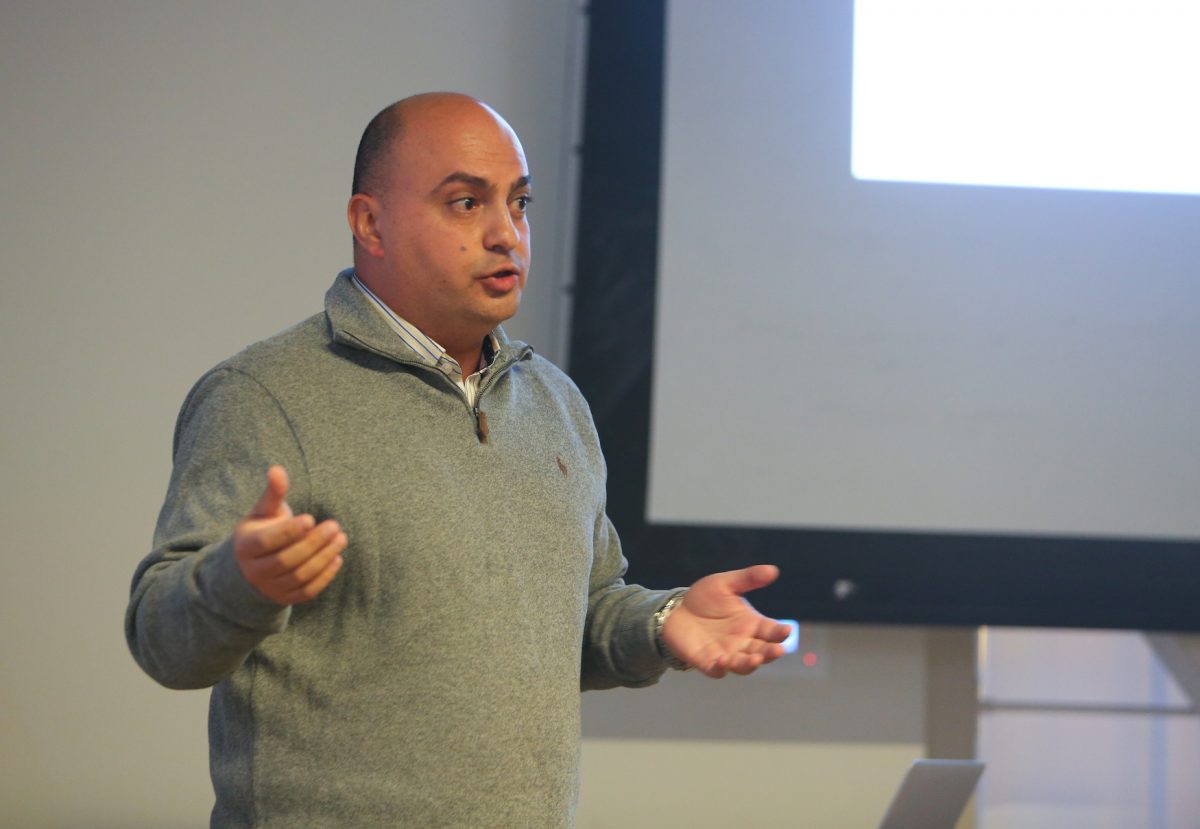 In 2002, Suleiman Halasah graduated from the University of Jordan with a degree in electrical engineering and went on to work first as a teaching assistant for the University of Jordan’s Department of Computer Engineering and then as a control engineer for the Jordan Valley Authority on irrigation projects. Yet within a few years, Halasah came to realize the work wasn’t for him. “I would sit in an office all day being totally disconnected from life,” he said.

Halasah was also disillusioned with the impact he was having at the Jordan Valley Authority. “Working with the government is really hard because of one main point: it’s a huge institution,” he said. “Making any change is almost impossible, especially if you’re assigned to a project far from the center of power. ”

Halasah’s frustration came with a silver lining, however. Because of the slow pace of work, he had free time to pursue other passions and became involved in several Jordan-based NGOs focused on peacebuilding, community development, and volunteering.

“One of the main projects I did was establishing a village computer lab that was the only one for 100 kilometers,” he said. “I saw how the lab brought opportunities to change people’s lives, and ever since then I’ve been focused on what I can do to directly help other people.”

In 2006, Halasah joined the Arava Institute for Environmental Studies in Israel where he co-founded a photovoltaic solar field company called the Arava Power. He went on to found the environmental service consulting agency i.GREENs; served as the acting associate director of the Arava Institute’s Center for Transboundary Water Management; and now co-directs the Jordan-Israel Center for Community, Environment, and Research (JICCER), which supports the well-being of natural and human systems of the Arava valley through cross-border community initiatives and research. He is also pursuing a Ph.D. in off-grid water and wastewater systems in the West Bank from Ben-Gurion University in Negev, Israel.

Halasah came to speak at UC Berkeley on October 29 in an event co-hosted by the Blum Center for Developing Economies, the Master of Development Practice, and the Berkeley Institute for Jewish Law and Israel Studies. Titled “Innovations and Collaboration at the Nexus of Food, Energy, and Water Systems: Toward Sustainability in the Middle East,” Halasah’s talk covered his role as founder and co-director of JICCER, his solar water pumping project with Palestinian and Jordanian farmers, and the lessons he has learned about community development and environmental peacebuilding.

Discussant Isha Ray, associate professor at the Energy & Resources Group and co-director of the Berkeley Water Center, joined Halasah afterward and highlighted some of the key takeaways: how those working on development often focus on financial and technological solutions, while ignoring cultural, political, and social realities; how patience goes beyond being a virtue in development but is the very key to success; how governments at times track and control nomadic tribes under the guise of development; and how the current push for “scaling up” needs redress as communities are location-specific.

I had the opportunity to sit down with Halasah before the event at Berkeley’s beloved Yali’s Cafe to ask him about his work. While waiting for our coffee, I asked how he would describe his day job. Halasah said:

“My main focus is to bring people together, so that they can get to know each other and discuss hard questions. But if the audience focuses on water, then I focus on how water can do this. If the audience focuses on environmental issues, then that’s how I present work. Ultimately, I use different opportunities for bringing people together to catalyze peace building in the Middle East.”

During his career, Halasah said he was shaped by two factors. The first was his father. When connecting the dots on how an electrical engineer in Jordan ended up at the Arava Institute in Israel, the first thing Halasah said was: “The flexibility my Dad gave helped a lot. My Dad very much believed that I should lead my own direction in life and as long as I felt like it was the right thing to do, he would support me.”

The second shaping factor for Halasah was traveling. Halasah has been to conferences all over the world to share his work in community development, peace building, and how he’s able to transcend the complicated politics of the Middle East. He has also traveled as a tourist to the US, Indonesia, China, Malaysia, Uganda, and many other countries.

“When you meet people from other nationalities, it opens your eyes,” said Halasah. “You don’t see yourself as superior to others. You see that everybody is very proud of their culture and the divisive things that separate people from different cultures and nations don’t exist anymore. It’s humbling.”

As I listened to Halasah’s talk at the Blum Center later in the day, it was clear how these experiences were reflected in both his professional choices and his outlook on development.

“The approach today is mainly one-directional. The implementer comes to the community saying, ‘This is your problem, this is its effect on you, and this is how I’m going to solve it.’ The community itself is totally disconnected. As a result, communities don’t take ownership of the solution, they don’t see it as their system. Then comes complications with the system when some part fails and people say, ‘This is their technology. Why should I fix it? How should I fix it? The NGO needs to come to see what is wrong with it.’”

Instead, Halasah argues, we need to “work directly with the community on defining the problem, brainstorming solutions, and figuring out what assets they have. It should all ultimately come from them.” For Halasah this means conducting interviews, holding roundtables with all stakeholders, and making sure the community has a voice at every step. “It’s their problem; they should know more about it than we do,” said Halasah.

Another topic that Halasah is passionate about is environmental peacekeeping. In explaining how natural resources, pollution, and social spaces can play a role in peace building, Halasah said, “For any conflict, there is a core problem, but there are also so many other things that can be opportunities for peacebuilding and community development. The environmental approach works because it affects everyone. And that’s something that can be used to bring people together.”

Halasah continued: “Once you bring people together people don’t talk about each other as ‘the other,’ as an imaginary person in their head—they realize it’s a human in front of them that shares a lot of the same interests.  People ultimately care about their level of living, about securing their food and water. They care about their kids, how their kids are being treated, and the resources they have. I see the environment as not only a tool for peacebuilding but also for community stability as it gets everybody to talk about their shared interests.”

Halasah had a clear answer when I asked what the key factor in making these talks successful is: trust. He said: “There’s high potential for things to be done, but the main obstacle is that people don’t trust each other. With my work, we always have a balanced team that represents different communities. I have an Israeli partner. She brings me to all her community meetings in Israel, and I bring her to all my meetings on the Jordanian side. When people see that there’s somebody from the other side that they learn to trust, there’s more open communication.”

As our coffee cups emptied and Halasah prepared to go to his next meeting, I asked him what advice he would give students pursuing a career in development engineering. Among seeing each moment as a learning opportunity, persevering, and staying positive, Halasah ended with this:

“I would say interdisciplinary projects are the best way to learn and get a full picture about something. If you are an engineer that looks at a technical solution, it doesn’t make sense to be isolated from the community. You need to go out there in the field to meet with people, listen to them, and see what they think. Too often, we think we have the right answer for something, but it might be for the wrong problem. We need to understand what people need in order to understand what the solution is.”